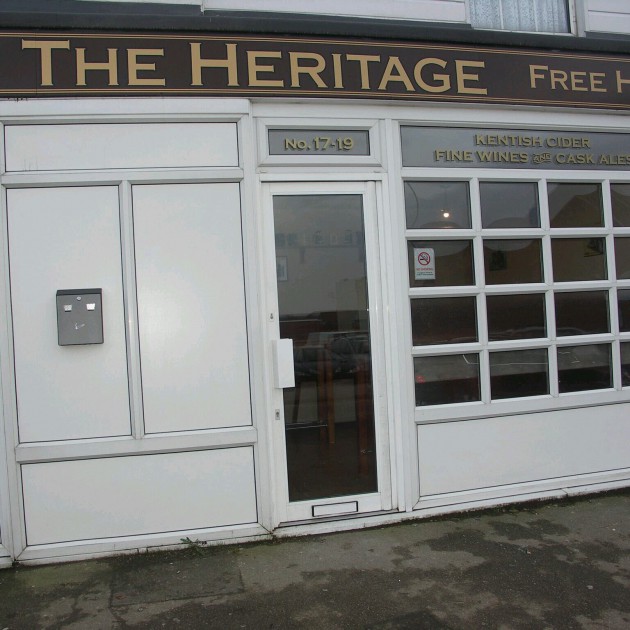 The micropub is owned and managed by Melvin and Margaret Hopper. Before taking the plunge to open their micropub, Melvin was previously a London police officer, and Margaret was a respected local primary school teacher. The pub is named THE HERITAGE as Margaret (nee Charrington) is part of the Charrington brewery dynasty, and within the micropub you will find many references to the Charrington brewery in the decor. The Heritage is slightly larger than many micropubs, offering bar and table service spanning two levels with seating for 30 and standing for 20, and serving mostly Kent ales and ciders with regular guest ales from further afar. Melvin and Margaret regularly hold events in support of two local Swale based charities, as well as jam nights to encourage young musicians to show their talent, and quiz nights for the entertainment of their clientele. The Heritage was winner of 2015 Swale Borough Councils’ Business of the Year Award in the Service to the Community category. Details of upcoming events are updated on The Heritage facebook page. Dog friendly pub.

Popped into this place purely by accident while waiting for my wife who was visiting a friend nearby. Had never even heard of a micropub before. On entering, I was surprised firstly, by how many were inside, secondly, by the warmth of greeting by a lady I know now was the owner. The range of ales on offer was exciting. I tried the Titanic plum porter, which was superb, and the Dockyard Church ale, also excellent. There were four ales on offer, with Whitstable Bohemium and Gadds Seasider also available. Impressive was the nine ciders to be tried. A great advantage for ‘tickers’, taster trays too. All locals friendly, and obviously a popular place. Will definitely visit again.