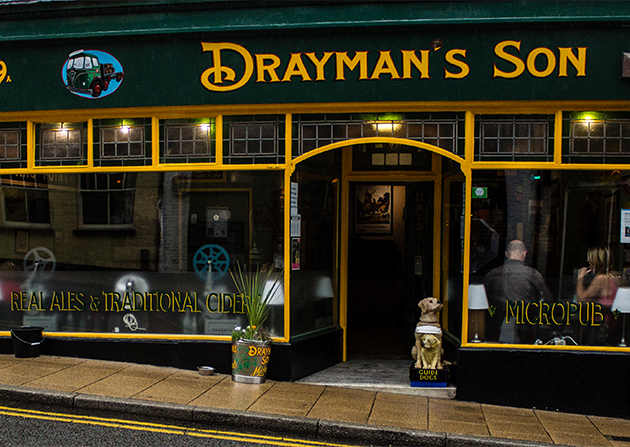 This Micro Pub has been running for two years, formally known as the Liberty Belle and is now under the new management of Jo and Andy Pearson who are changing the name to the Drayman’s Son in memory of Andy,s father who worked as a Dray Man in the local brewery . Still selling a selection of Ales, Porter, Mild’s and Stouts from local Micro Brewery’s along with the occasional visitor from a brewery out of the area. The owners look to have a choice of at least six real ales every weekend. The pub also sells a selection of local Ciders. Your drinks are served direct to your table. Currently the pub has a 1953 Triumph Tiger on display, along with other memorabilia.
In April 2016 they won CAMRA City Pub, Cider Pub and Overall Pub of the Year

Enjoyed the nicest gin ever! Pink Grapefruit gin served super chilled. Will be back for one of the other many flavours!

Really has improved with the new owners, an always changing selection of beers with a few wines and a local gin, with the emphasis on local mico brewries. The cider choice is the most wide ranging in the area, with up to 16 on the board to choose from. Some of the regular punters are really interesting, and you can always find something to talk about with any one of them. If you in Ely like real ale or Cider and a good old fashioned pub feeling The Draymans Arms is the place to go.

I really enjoyed visiting place (early 2016). A great selection of ale, cider and locally made gin. Excellent decor and friendly people. Can’t wait to go back.